I was first introduced to Nancy after a very frustrating two months of attempting to determine what was wrong with my horse. I had just purchased this big beautiful Arab / Trakaner, 6 months prior, when suddenly he got himself cast in his stall and was injured. He was showing what appeared to be lameness in his left hip, but we couldn't be sure. My vet had ultrasounded his hind leg but was unable to find the actual location of the injury. It was thought it might be a high suspensory. 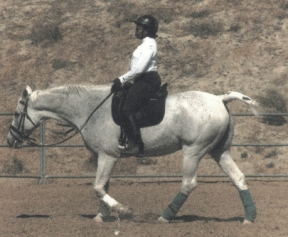 My vet suggested I lay up my horse for a few months. After five months, I became quite frustrated that my horse was still lame and then, someone at the barn mentioned Nancy Hall and this machine she had that was supposed to perform miracles. It was told that she could heal bowed tendons, cure suspensory problems and I think they mentioned something about her "walking on water"...

So after much deliberation, I called her. She was wonderful. She explained to me what she was doing every step of the way. She described how the machine worked and what to expect from the "treatments" as time went on. My horse, "Maybe Later" began to whinny every-time he saw her truck drive up, and I watched him do a back kick during one treatment that would make most ballerinas envious. That moment brought me to tears to imagine what pain this big beautiful creature must have been enduring. The biofeedback on the Acuscope helped Nancy to determine that the actual injury was where the suspensory tied in between the sesamoid bones behind the fetlock. Nancy started treating "Maybe Later" daily and then rotated out as the tissue improved.

Well, "Maybe Later" is all-better now and we are planning to enter him in his first dressage show very soon. I just want to say Thank You to Nancy for her commitment, dedication and the ability to help me keep hope alive during a very "trying time for me and my horse". I am a "true believer" of this Electro-Acuscope / Myopulse Therapy. I can say with confidence that it helped my horse both during his lay-up and immediately after when he received his follow up treatments.